Vincent november 24, 2016 Vision on the future of energy 0 reacties

To create a framework for Crowdsourcingweek Europe 2016, people from various backgrounds formed a work-group to reflect on the way to accelerate energy transition and the move to a more sustainable society. On the back of global warming, the topic is increasingly high on the agenda of a number of politicians. Besides, and probably more importantly, there seems to be a growing awareness on the long list of negative consequences of the so-called carbon economy; health problems, mobility issues, deforestation, species extinction, thawing of the polar ice caps, population displacements, geopolitical conflicts… Although there are moves in the right direction, the most significant probably being the signing of the COP21 treaty in Paris in December 2015, the challenge remains huge, with booming demography in developing countries and a dramatic surge in energy consumption, also attributable to new technologies. This paper strives to popularize a complex topic, and highlight the brakes still restraining a Green Revolution.

Understanding what is at stake

Understandably, one of the main hurdles to tackle on energy and environmental issues is its complexity. There is much confusion, and most people miss the big picture.

First it is important to have in mind the Global Energy Mix, and the impact of each energy source on Carbon Emissions. As one can see below, fossil fuels (i.e. Coal, Oil and Natural Gas) account for approximately 70% of the energy consumption in the World. And as one can see on the second chart, fossil fuels are, by far, the energy sources that produce the most Carbon Emissions. It is important to note that electricity is just a fraction of energy consumption (+/- 20%); meaning that even countries that have invested heavily in nuclear reactors are still very much dependant on oil; indeed oil accounts for 98% of our needs for mobility. 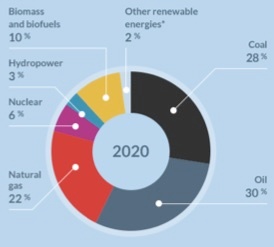 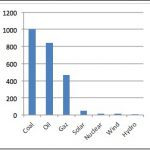 It is a fact that our development model for the last two centuries has been highly dependent on fossil energy, first coal, then oil and gas. Quite logically, the priority has been given, for a long period, to economic development, with little concerns about environmental consequences.

The oil crisis in the 1970’s was an eye opener on Western countries’ energy dependency, not to mention the geopolitical tensions in the Middle-East more or less directly linked to it.

But at that time, little was said about the fact that carbon emissions, by trapping solar energy in the atmosphere, raises temperatures on Earth. The problem is aggravated by the fact that Carbon dioxide persists for decades, meaning reversing the situation will take a huge amount of time. The direct consequences of this rise of temperatures are:

For Humanity, these elements can only result in population displacements, starvation, diseases and conflicts.

The shift to a low-carbon economy requires a long-term vision – a change of paradigm hampered at both individual and organisational level.

One of the elements that makes the shift to a low-carbon economy extremely challenging is the fact that, for the vast majority of people, the problem is perfectly invisible:

In fact, as long we don’t really feel the pain, environmental issues and its consequences listed above remain a low priority for the vast majority of the population. Awareness is necessary but seems, at this point, far less efficient than financial incentive or coercive measures.

For institutions, corporates, governments etc., tackling environmental issues is made very complex by the necessity to adopt a long-term perspective, by opposition to short-term interests. For instance investing in renewable energies means heavy capital expenditures and in many cases giving up cheap fossil resources and an industry that employs thousands of workers, a difficult move for industrials and governments.

If we consider that time horizon for Governments is generally around 5 years, for industrials around 2 years, and even shorter for financiers, obviously adopting measures with a vision and a return with a 30 to 50-year horizon is extremely challenging.

Amongst the numerous renewable energies, wind and solar photovoltaics are currently the fastest-growing sources globally. Between 2008 and 2015, the average cost of land-based wind decreased by 35% and that of solar photovoltaics by 80%. A "next generation" phase of deployment is emerging, in both resources are technologically mature and economically affordable. Moving further, some interesting innovation in these fields could accelerate further the potential; scientists are for instance currently inquiring on the development of high-altitude wind turbines capable of harnessing stronger and more consistent winds higher in the atmosphere.

This being said, according to experts, the biggest potential lies in energy saving, or energy sobriety. As of today, our economic model and our standards are living tolerate or often encourage (1) people to use cars that weight +/-1.5T to commute every day, (2) planned obsolescence of electronic devices, (3) purchase food from overseas, etc. Examples of energy saving are countless; appliances on standby consumes the equivalent to several nuclear reactors’ production at European scale, and inefficient thermal insulation can bring heating to represent over 50% of a household’s overall energy consumption.

Renewables and savings will however not be of any help to remove the carbon accumulated in the atmosphere during the last century. For this, it seems that trees is the best solution to reverse global warming, and once again, the potential is considerable.

As intergovernmental decisions appear as a pre-requisite to any impactful change, to avoid unfair commercial competition that would give an economic advantage to biggest polluters, the Paris Agreement (COP21) in 2015 is a milestone. Indeed world governments finally found an agreement to limit carbon emissions to keep global warming “well below” a 2°C rise above pre-industrial levels, and possibly below a 1.5°C rise. In order to achieve this we must achieve carbon neutrality by the second half of this century.

Governance at supra-national level is increasingly important for global issues. The European Union, one of the most advanced supra-national integration project in the World, and one of the actors that has been at the forefront of the Energy Transition, should continue to play a leading role in the coming years, the Paris Agreement being a first step, with many efforts to come.

Last but not least, empowerment is absolutely essential. In the end, to overcome such a gigantic challenge, inducing massive disruption of existing industries, individual behaviours will make the difference. Empowerment primarily means decentralisation of energy production – until now, energy policies have been driven by top-down approaches that (1) have failed to involve end-users, citizens, (2) that have in most cases been influenced by other objectives and interests.

The benefits of bottom-up approaches are significant; it boosts awareness of the crowds, it creates grass-roots movements and initiatives, it ultimately builds-up a demand for greener solutions that make them economically viable. The wave of innovation we are undergoing should accelerate further decentralisation, renewable energy can be produced by small units and even house-holds. In the future, prosumers (producers and consumers) could become the norm, in a distributed and interconnected system.

In the end, the challenge is technical as much as cultural – a genuine switch to sustainability for the benefit of our planet and humanity will require the involvement of individuals as much as institutions; a mix of coercive measures to overcome resistance of conservatives and those who defend short-term personal interests, and empowerment to boost the emergence of solutions that will benefit all of us in the long-term.

The original text can be found here.